As of May 25th 2018 the Data Protection Act 2018 (DPA2018) has taken effect in the UK, supporting and supplementing the implementation of the EU General Data Protection Regulation (GDPR).

An important requirement in the DPA2018, going beyond the GDPR, is the inclusion of an Age Appropriate Design Code (section 123 of DPA2018) to provide guidance on the design standards that the Information Commissioner’s Office (ICO) will expect providers of online ‘Information Society Services’ (ISS), which are likely to be accessed by children, to meet.

The ICO is responsible for drafting the Code and has issued a call for evidence is the first stage of the consultation process.

END_OF_DOCUMENT_TOKEN_TO_BE_REPLACED On 21st March the House of Select Committee on Communications published a report called ‘Growing up with the internet’. The report is based on an enquiry conducted by the House of Lords into Children and the Internet. UnBias team member Professor Marina Jirotka served as a specialist advisor to the enquiry and team member Professor Derek McAuley gave verbal evidence to it, elaborating on the written evidence submitted by Perez, Koene and McAuley.

END_OF_DOCUMENT_TOKEN_TO_BE_REPLACED 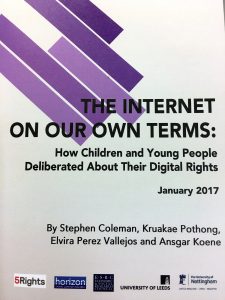 You are invited to join us for the launch of a groundbreaking report that articulates the voice of children and young people, and their relationship to the internet and digital technologies;

How Children and Young People Deliberated about their Digital Rights

In April 2015 young people aged between 12 and 17 gathered together in the cities of Leeds, London and Nottingham to participate in a series of jury-styled focus groups designed to ‘put the internet on trial’. In total, nine juries took place which included 108 young people, approximately 12 participants per jury.
The report outlines the ground-breaking research process, using actors to set scenarios for debate and a deliberative process to capture the changing views of young people as they examine a broad range of claims and evidence.
The policy suggestions, straight from the mouths and imaginations of the young participants, aimed at Ministers, Industry, Educators and Business are vibrant, surprising and pragmatic.
We hope you will join us to hear more

This work is licensed under a Creative Commons Attribution 4.0 International License.